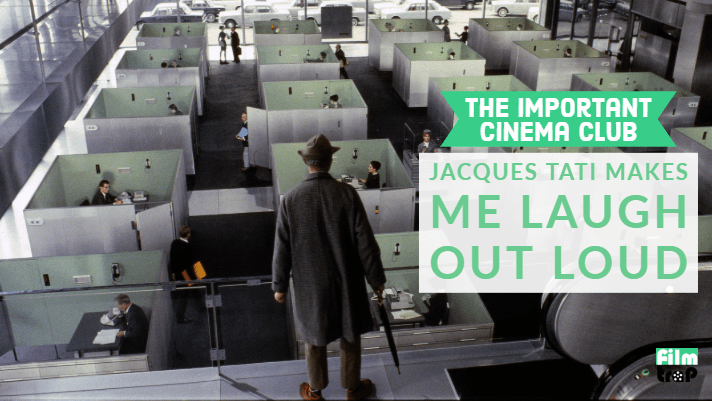 We discuss the work of French funnyman Jacques Tati and his films MR. HULOT’S HOLIDAY, MON ONCLE and the staggering masterpiece that is PLAYTIME.

Become a Patreon subscriber for $5 a month and get an exclusive episode every week! This week we discuss Cannon Film’s production of Jean-Luc Godard’s KING LEAR.

Check out The Important Cinema Club on Film Trap

Clumsy Monsieur Hulot (Jacques Tati) finds himself perplexed by the intimidating complexity of a gadget-filled Paris. He attempts to meet with a business contact but soon becomes lost. His roundabout journey parallels that of an American tourist (Barbara Dennek), and as they weave through the inventive urban environment, they intermittently meet, developing an interest in one another. They eventually get together at a chaotic restaurant, along with several other quirky characters.

When the ever-hapless Monsieur Hulot (Jacques Tati) decides to vacation at a beautiful seaside resort, rest and relaxation don’t last long, given the gangly gent’s penchant for ridiculous antics. While simply out to enjoy himself, the well-meaning Hulot inevitably stumbles into numerous misadventures, including an utterly disastrous attempt at playing tennis, as he encounters fellow French vacationers from various social classes, as well as foreign tourists.

Mr. Hulot (Jacques Tati) is the head designer of the Altra Automotive Co. His latest invention is a newfangled camper car loaded with outrageous extra features. Along with the company’s manager (Honoré Bostel) and publicity model (Maria Kimberly), Hulot sets out from Paris with the intention of debuting the car at the annual auto show in Amsterdam. The going isn’t easy, however, and the group encounters an increasingly bizarre series of hurdles and setbacks en route. Tati’s use of the word “trafic” instead of the usual French word for car traffic (la circulation) may derive from a desire to use the same franglaishe used when he called his previous film Play Time, and the primary meaning of trafic is “exchange of goods”, rather than “traffic” per se.[2] The word “Trafic” was subsequently used for a light utility vehicle model manufactured by Renault starting in 1981.