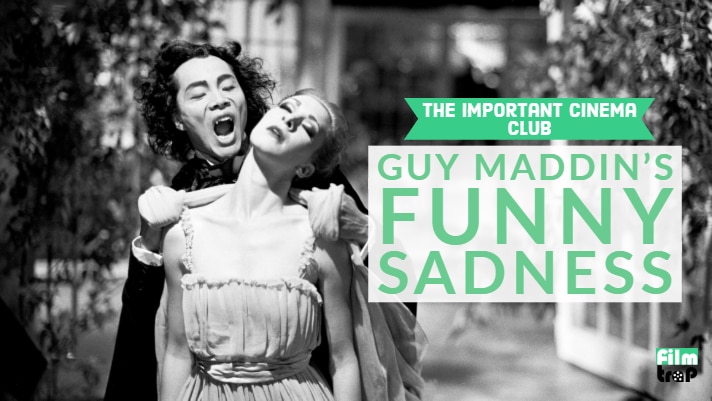 We take a phantasmagorical trip down the cinematically lathered mind slide of director Guy Maddin in this week’s Canadian Content sponsored episode of The Important Cinema Club. Are his films weird enough? Do they move us emotionally? Will he ever direct a Marvel super hero film? All those answers* and more will be answered inside this newfangled example of the audiosonic story machine**

*Well, some of them.

Become a Patreon subscriber NOW for $5 a month and get an exclusive episode every week!

Tales from the Gimli Hospital is a 1988 film directed by Guy Maddin. His feature film debut, it was his second film after the short The Dead Father. Tales from the Gimli Hospital was shot in black and white on 16 mm film and stars Kyle McCulloch as Einar, a lonely fisherman who contracts smallpox and begins to compete with another patient, Gunnar (played by Michael Gottli) for the attention of the young nurses.

Maddin had himself endured a recent period of male rivalry and noticed that he found himself “quite often forgetting the object of jealousy” and instead of becoming “possessive of my rival.” The film was originally titled Gimli Saga after the amateur history book produced locally by various Icelandic members of the community of Gimli (Maddin himself is Icelandic by ancestry). Maddin’s aunt Lil had recently retired from hairdressing, and allowed Maddin to use her beauty salon (also Maddin’s childhood home) as a makeshift film studio (Lil appears in the film briefly as a “bedside vigil-sitter in one quick shot [taken] just a couple of days before she died” at the age of 85. After Maddin’s mother sold the house/studio, Maddin completed the remaining shots of the film at various locations, including his own home, over a period of eighteen months. Maddin received a grant from the Manitoba Arts Council for $20,000 and often cites that figure as the film’s budget, although also estimates the actual budget between $14,000 and $30,000.

In this experimental musical set in 1930s Winnipeg, Canada, amputee baroness Lady Port-Huntley (Isabella Rossellini) organizes a competition offering $25,000 to the person who can compose the saddest music in the world. Musicians — including a depressed Broadway producer (Mark McKinney), his guilt-stricken father (David Fox) and a Serbian cellist (Ross McMillan) — flock to Winnipeg with the hope that they will be the best at conveying tragedy and grief in their music.