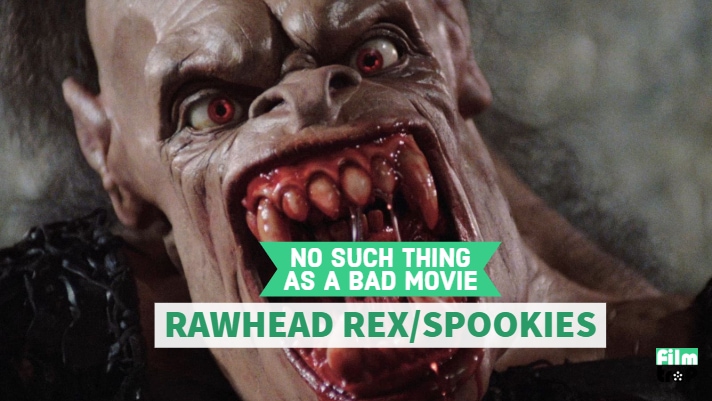 It’s Halloween time! We watch two “spooky” movies this week: Rawhead Rex and Spookies! Is it rawhead or rawhide? And just how many monsters can you fit in one 90 minute film?

Rawhead Rex (1986) is one of Clive Barker’s most infamous films – disliked by its author, reviled by the critics, and a joke for its fans. Could it actually be fun? Why is there a super special edition that’s been recently released in a lavish package by Kino Entertainment?

Spookies (1986) was the dream of two first time filmmakers and it was taken away from them, completely re-cut and released in a nightmare form that simply made the movie even more incomprehensible. Is it worth a watch?

Listen to find out!

Email us at [email protected]
Tweet at us: @apriletmanski@Sgtzima@DeclouxJ

NEW 4K RESTORATION! Ireland will never be the same after Rawhead Rex, a particularly nasty demon, is released from his underground prison by an unwitting farmer. The film follows Rex’s cross country rampage, while a man struggles to stop it. Written by Clive Barker and directed by George Pavlou.

Taking a wrong turn, travelers find themselves trapped in a mysterious house. One horror after another threatens them as the sorcerer who lives within needs sacrifices to give eternal life to his beautiful bride

“This is a tale nobody wanted to be told. It’s a cautionary tale about an obscure 1980s horror movie cobbled together from work by two separate groups of filmmakers working on the same set with two totally different casts. There’s also a savage businessman, crooked real-estate dealings, betrayal, madness, death, ex-Green Berets, ex-porn stars, and one of the founding fathers of the United States.”

Check out the oral history of the film: THE STRANGE SAGA OF SPOOKIES