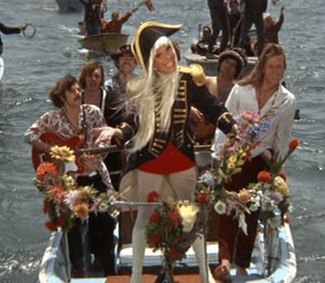 Otto Preminger was a director of amazing intentions and not always amazing execution, at least in the latter half of his career, but to me he’ll always be one of the unsung heroes of cinema. Preminger made the first major Hollywood where the words bitch, contraceptive, panties, penetration, rape, slut and sperm were uttered (Anatomy of a Murder), he cast Frank Sinatra as a heroin addict in Man with the Golden Arm, he made not one but two all-black musicals before 1960 (Carmen Jones and Porgy and Bess), in Advice and Consent and Tell Me That You Love Me, Junie Moon he had gay characters as sympathetic leads, Junie Moon even had had a wheelchair-bound gay man in a flirtatious relationship with a hotel worker played by ex-footballer turned actor/legend Fred Williamson.

You’d think after making super serious, politically driven films for years Preminger would want to take a break and do something more light-hearted, well he did and it’s called Skidoo and boy is it something else.

my reaction most of the movie

Skidoo tells the story of Tony and Flo Banks, played by the dream team of Jackie Gleason and Carol Channing, who’s lives go in a tailspin after Tony, a former hitman, is brought out of retirement for one last job unbeknownst to his family. Despite his reluctancy, he agrees to go to prison undercover in order to kill his former friend “Blue Chips” Packard before he can testify to the US Senate’s Crime Commission. While he’s away Flo invites her daughter’s boyfriend and the hippie commune he lives with to stay in their home while beginning her own investigation as to why her husband is in jail.

and seducing Frankie Avalon has something to do with it, trust me

Skidoo feels like Preminger watched Blake Edwards’ The Party and loved the climax so much he decided to make a whole movie about it. For those of you who haven’t seen The Party (a.k.a. damned fools) it ends with the titular party being disrupted by the arrival of the free-spirited hippie daughter of the uptight couple throwing it. She brings all of her friends (plus an elephant) to the house and proceeds to fill the entire first floor with free love and bubbles… lots of bubbles. To me The Party is a perfect comedy (well if you can ignore Peter Sellers brown-face character), it works on so many levels but especially it succeeds by building great comedic tension before reaching the pinnacle of ridiculousness by the end. When it finally reaches it’s climax it feels like the ultimate pay-off for all the awkwardness Sellers’ character has had to go through.

Skidoo is like that except with no tension, it tries to be all pay-off and fails miserably. It creates the illusion of “pushing the limit” with it’s hilarious cameos, musical numbers, hippie communes, numerous LSD trips and fantasy sequences but it never goes quite far enough to have any kind of lasting impact. It’s oddly tame when it really shouldn’t be, attempting to play to a younger audience but clearly created by the previous generation, like the entire script was written with the notion “what do kids like these days?” in mind.

But is Skidoo really that bad? Absolutely, but I loved every messy, dated, non-sensical second of it.