ICC #3 – John Woo and Michael Bay: The Beasts of Bullets 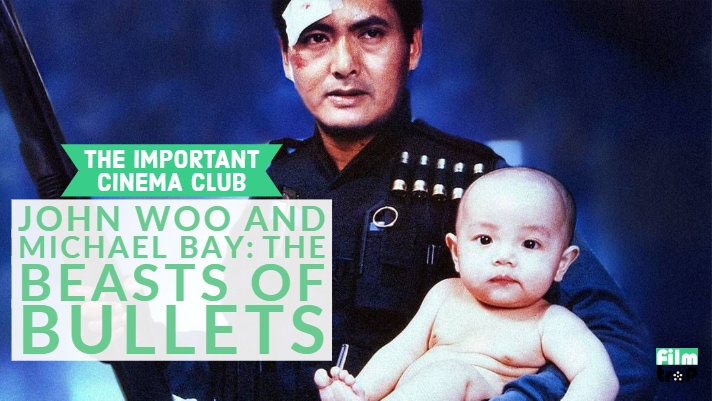 Hard Boiled versus Bad Boys 2. Hong Kong versus America. John Woo versus Michael Bay. Who is the greatest action filmmaker our planet has ever seen!? It’s a battle of the explosion titans as Justin and Will dive into both films and dissect what makes them work (or not), why they are held in such high regard and what they believe the future will hold for both stylish auteurs. Get on the edge of your seat and buckle up for the ride of a life time – that involves two people talking about MOOOOOOVVVIIIIIEEEES!

A cop who loses his partner in a shoot-out with gun smugglers goes on a mission to catch them. In order to get closer to the leaders of the ring he joins forces with an undercover cop who’s working as a gangster hitman. They use all means of excessive force to find them.

The drug ecstasy is flowing into Miami, and the police want it stopped. Police Detective Marcus Burnett (Martin Lawrence) and his partner, Mike Lowrey (Will Smith), are just the men to do it. They track the drugs to a Cuban smuggler, Johnny Tapia (Jordi Mollà), who is also involved in a bloody war with Russian and Haitian mobsters. If that isn’t bad enough, there’s tension between the two cops because Lowrey is romantically involved with Burnett’s sister, Syd (Gabrielle Union).

A Better Tomorrow is a 1986 Hong Kong crime film, directed by John Woo, and starring Ti Lung, Leslie Cheung and Chow Yun-fat. The film had a profound influence on the Hong Kong film industry, and later on an international scale.

FBI chemical warfare expert Stanley Goodspeed (Nicolas Cage) is sent on an urgent mission with a former British spy, John Patrick Mason (Sean Connery), to stop Gen. Francis X. Hummel (Ed Harris) from launching chemical weapons on Alcatraz Island into San Francisco. Gen. Hummel demands $100 million in war reparations to be paid to the families of slain servicemen who died on covert operations. After their SEAL team is wiped out, Stanley and John deal with the soldiers on their own.